I started playing football in my sophomore year at Kahuku HS in Hawaii but that was cut short by an injury. After baseball and boxing in the following years, I gained enough confidence to pick up football again but I never had the film or the money to play small college ball in the mainland so I went after my degree at home and played rec league, semipro, and any other pickup game that I could find. In my journey, I played DE, QB, and OL; and I was lucky enough to be mentored by John Beck, Makoa Freitas, and Mike Iupati among others. This led to a few individual accolades and I was fortunate to be a part of a few championships.

Favorite football memory: Anytime I got to play alongside my brother, PJ. Coming from a strong football community like Laie, there was always a special motivation to represent our family and community no matter where we went. It’s pride in our upbringing.

I want to publicly thank Coach Goodman for giving me an opportunity to coach in this great program; my wife Sangeeta and 3 kids Sophie, Amulek, and Raina for allowing me to take the time out to be here; and the OLine for simply giving your all. 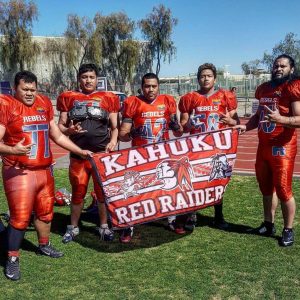